In early 2019 an interview with me about my relationship with Cuba appeared in the TOURVITAL blog. Due to the circumstances with Thomas Cook’s insolvency, Tourvital’s parent company, this interview is now offline, that’s why I am publishing the full original interview here, so that the post is not lost, and you can get some insights, e.g. how I came to Cuba

Where does your close relationship with Cuba come from? 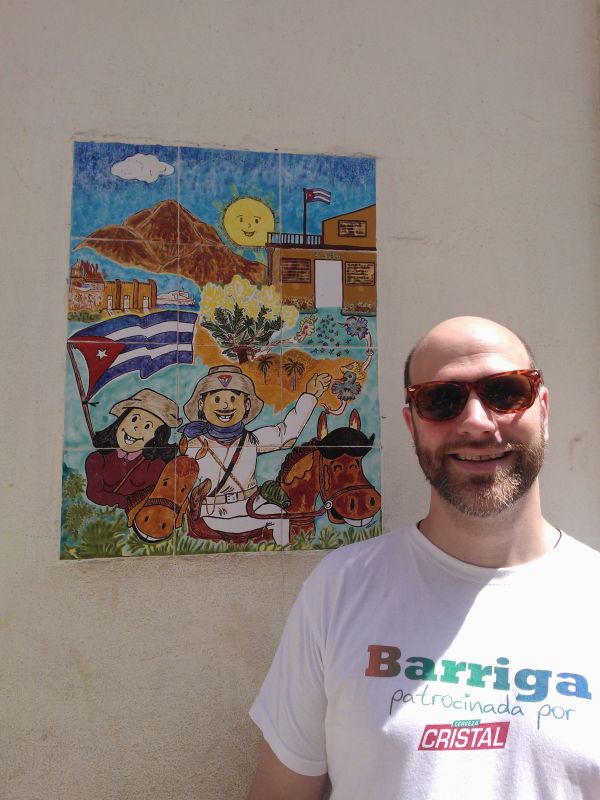 It was surprising and unexpected, not planned and completely random – but therefore all the more fun! I was in Cuba for the first time in 2011 to teach entrepreneurship. The Humboldt University is organizing a regular summer school in Havana in partnership with the Universidad de la Habana, and entrepreneurship was the topic of the day. The summer school is attended by Cuban and German Business and Economics students, the courses are taught in English and are recognized at both universities. And as it turned out, at the summer school I met my love of my live, Lianet, who was a professor of Political Economy at the University of Havana. From then on, Cuba never let go of me, privately and professionally. Not only did I go to Cuba regularly afterwards to visit my then still girlfriend, I also started the blog Cubanews.de, where I have been reporting weekly on the beautiful and exciting sides of Cuba ever since.

What is it about this island state that fascinates you so much?

From the point of view of an entrepreneur who relies on creativity and improvisation in solving problems, I find Cuba fascinating, of course. Problems are solved as good as possible – and incredibly creative ideas always come to the forefront. Despite all the adversities, everything is going – not well, but live doesn’t break down on the island. Maybe live is not smooth, but in such a way that Cubans can still cope with everyday life – and (almost) always with a smile or a song on their lips. And that’s just it: the Cuban soul is simply more open to the cheerful sides than the brooding, planning “I can’t complain”-typical German.

I spend most of my time in Havana, which is, of course, due to the location of the University of Havana, but I am also a city person.
Besides Havana, I’m also a fan of Trinidad. It’s always a journey through time while walking through the old streets there, or on the cobblestone pavement, and seeing houses from the founding period of Cuba everywhere.

What do I need to do or see in Cuba when I am on vacation there?

In any case, a trip in one of the old street cruisers should be part of it. Not a tourist convertible, but a simple taxi from the street, with a retrofitted boat engine and bare interior. The street feels much closer, every bump comes directly through or leads you to jump in the seat.

For those interested in culture, I would definitely recommend a visit to the Museo de Bellas Artes, the museum for Cuban art. Cuba has never lost touch with the worldwide art scene and has a lot to offer. Cuban artists are not only hanging in the MoMA, but also in several German museums, e.g. the New National Gallery in Berlin or the Sprengel Museum in Hanover. A small anecdote on the side: the New National Gallery in Berlin was actually designed by Mies van der Rohe, the famous Bauhaus architect, for Havana and the revolution brought the design to Berlin.

Do you have any culinary tips?

My favourite dishes are Ropa Vieja and Picadillo. Ropa Vieja (“old laundry”) is a mixture of goulash and pulled pork and looks like old laundry that is already fraying. It is usually made from pork, rarely in its real version from beef – almost like the Wiener Schnitzel, which is usually only “Viennese style”, made with pork and not beef. 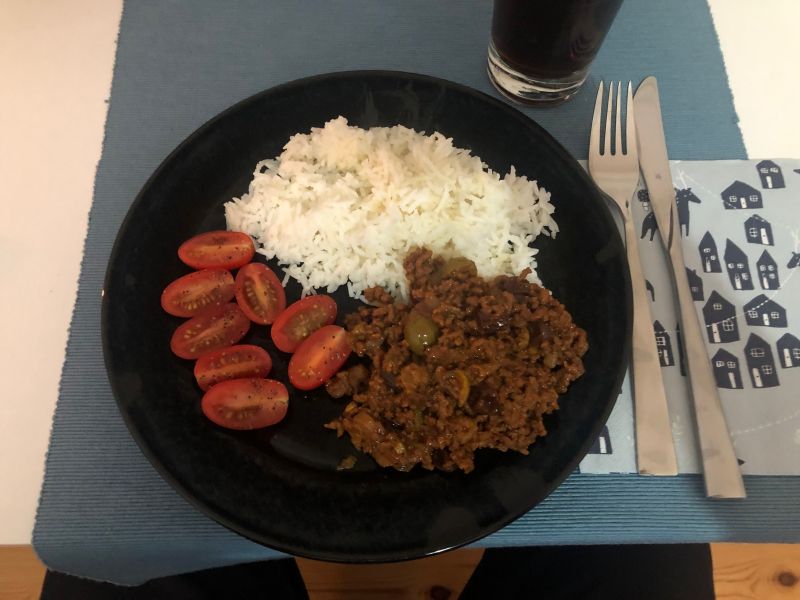 Picadillo reminds me of a bolognese and is my absolute favourite dish. Boiled minced beef, with olives and raisins, white rice in addition. Very tasty, but hard to get in Cuba, as beef is hard to get.

All in all, there are now some exciting restaurants that stand out from the Cuban standard food. My tip: download the restaurant pages of TripAdvisor already at home, with address and phone number for reservation. In Cuba it is sometimes hard to connect to the internet, so what you have on your phone, you have there.

But Cuba is not really known for its food, but for its cocktails, Mojito, Cuba Libre, Daiqiri, Presidente… Which one is the best? It depends on your taste, just try ! The important thing is a good cocktail doesn’t have to be expensive in Cuba, more than 4 CUC is a tourist sneak.

Cuba and its dream beaches – where do you like to swim most? 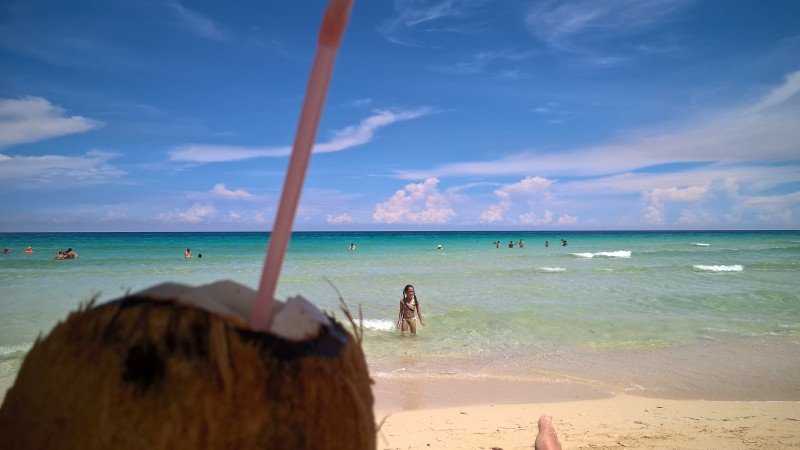 I have to say that I’m not really attracted to the typical dream beaches – I’m mostly in Havana – and the Playas del Este are right nearby. They are excellent because they are empty, and you can easily get out of Havana’s stress and into the peace of the Caribbean Sea. Sure, the sand is finer in Varadero and the Cayos, but they are also much more touristy. At the Playas del Este, specially on the weekends, one also meets the Habaneros that enjoy a bottle of rum there.

Cuba is very much afflicted with clichés: an economically weak but sunny island with inhabitants that are constantly smiling, playing music, smoking cigars, drinking rum, and driving vintage cars. Which of these are myths, which is reality?

Especially the vintage cars are of course the tourist attraction. Nothing stands for Cuba like a picture of a pink 50’s Chevrolet. On almost every picture from Cuba, you can see one. Every photographer skilfully ignores the fact that there are now far more Chinese and European cars.

Otherwise, a lot of things about the island are really clichéd: the inhabitants may not always be cheerful, but they are much less broody. No wonder, the sun is shining 200 days a year, that makes you feel good.

Cubans learn Salsa at school, during the breaks six-year-olds dance to Latino rhythms with each other – while we boys in Germany still say “Eeeeeee, a girl” 😉
Rum is also drunk a lot, often simply because the beer is too expensive. Only instead of cigars, cigarettes are mostly smoked, sometimes you even get the feeling that there is a non-smoking ban in the country…

Apart from that, the people here in Cuba live their lives, even when everyday life is a struggle. La Lucha (= The Struggle) is the name for doing the everyday errands: where to get the meat, where to get the rice, where to get kitchen sponges, where to get fans, where to get toilet paper. Only rum and cigarettes are always available, they never go out… [Update 2021: now even those are rare, Cuban economy has serious problems now]

As tourists, of course, we rarely come into contact with real Cuban life. But a visit to a Cuban supermarket can give you a good insight and is worthwhile for every Cuban vacationer. There are maybe 60 products that are on all shelves so that it doesn’t look so empty. Also, a short walk over to one of the farmer’s markets gives you some interesting insights. There is a lot at these markets, but they all have the same thing: mainly the fruits of the season.

It’s a pity what the bankruptcy of Thomas Cook has also caused in Germany, I met nice people at Tourvital!

In any case I wish you all a good time, whether here or in Cuba, enjoy live and your vacations!

When is the best time to travel to Cuba?