A Glimpse into the Daily Lives of Cubans

Update from the editor:
unfortunately, the situation in Cuba is worse since Marg wrote this article over a year ago, basic products like eggs, bread, beans or rum (!) are hard to get at the moment, sugar has to be imported. Cuba tries to counter these shortages with economic reforms, but it is unclear if the situation will change soon. Hotels and private restaurants or casas particulares (bed and breakfasts) will still have enough food for tourists, but for the average population, the situation is dire – although nobody starves.
Saludos, Dietmar

Grocery shopping in Havana might sound like a mundane topic compared to its rich culture and breathtaking views, but it was, by far, the activity which challenged and frustrated us the most.  It also quickly gave us a glimpse into the daily lives of Cubans that most casual tourists do not see. Our Western privilege was never so apparent.

The first major difference from grocery shopping at home is that you need to go to several stores in order to, hopefully, find what you need. On the walk to and from the stores, it is not uncommon to stop a fellow grocery shopper to ask at which store they bought the loaf of bread peaking over the top of their bag, or the mangoes that are weighing them down. Their valuable information will determine our strategic plan as we try to hit as many stores as possible.

“We Buy What We See” 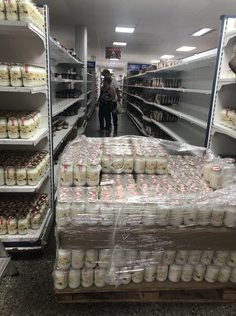 When we first arrived in Havana, we would buy one or two of an item, but we quickly learned that that is not how to shop in Havana.  A Cuban colleague explained that in Cuba “we buy what we see.”  No sense creating a list as, more than likely, most items won’t be available.  We have become accustomed to seeing, at one of the larger stores, one aisle completely filled with cooking oil, the next with just mayonnaise, the next completely empty.  On occasion we might see some jars of olives, bottled water or milk. That’s when we’ve learned to go big and buy whatever we can carry because we might not see it again for a few weeks or even months. At the smaller bodegas, they might have only two to three items such as soap, yogurt and beer. You need to stop in at every bodega you see in order to get lucky and find something you need and want. 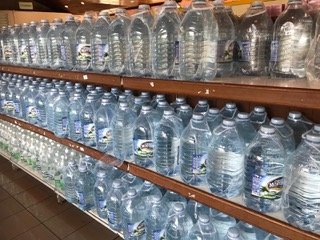 One day, as we were walking down the street with a 24-pack of beer and two jugs of water, someone stopped and asked us where we got the water, not the beer.  Bottled water is often a rarity and coveted by all.

Lining Up is a Way of Life Here 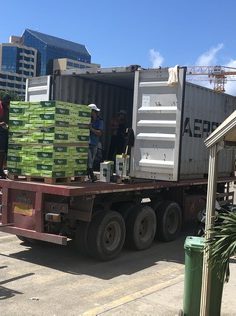 When a food shipment comes in, word spreads quickly that a valued or hard-to-find item has arrived. My husband was shopping one day where they had frozen chicken breasts after a drought for a few months.  He stood in line for an hour and a half to purchase his two meagre bags of chicken, already partially thawed by the time he paid.  By Western standards this sounds crazy, but it is what you do in Havana as you have no idea when that item will be in the stores again. Lining up is a way of life here.  Cubans are stoic and patient.  When you join a line, you ask the person who appears to be last in line, “La ultima?” which means “Are you the last?” This confirms your place in the line, and everyone, for the most part, respects this unwritten rule.  If someone tries to make a move, other people in line are quick to set the culprit straight.

The Agro – One of those Culture Shock Moments

Every Saturday morning, our destination is an agro – a vegetable and fruit market. On nearing the market various people will approach and in a clandestine fashion ask, “Huevos? Papas?”  They are selling eggs and potatoes on the black market. You always know when inspectors are there as the vendors appear much more nervous.  Yet, the transactions continue as it impacts someone’s livelihood.  The open-air market is a sea of colourful veggies and fruit. It is a frenetic pace in the market. Making calculations in our head between the currencies while listening intently to the rapid Spanish being directed at us combine to evoke one of those culture shock moments.  Our senses are on overload and it can be overwhelming.  But despite these episodes of discomfort, we find Cubans to be patient, understanding and fair in their dealings.

It is a Reminder of the Privilege we have as Westerners 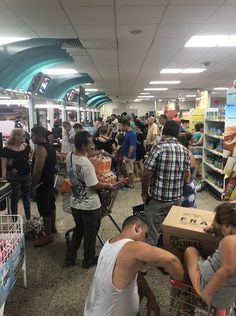 As I write, I am well aware of the privilege of my position as an expat. When our son visited, he arrived laden with spices, peanut butter, a small blender for smoothies and a ridiculous amount of chocolate.  If we cannot find chicken, mangoes or milk we can elect to go out for a meal as we have the financial resources. The average Cuban makes $20 per month, which certainly does not allow for enjoyment at the multitude of amazing restaurants in Havana.  It is a reminder of the privilege we have as Westerners to live in a country of plenty, where we can drive to the supermarket with a list and find everything. It seems so basic, but from the Cuban perspective, it is a wonder.

Thank you very much, Marg, for this first hand insightful article on the realities of Cuban life. Hopefully you will soon be able to go back to Cuba!
Dietmar

How Dangerous Is Cuba?