The beaches of Havana – after the city, take a trip to the beach!

If you ever want to get stranded in Havana – go to the beach 😉 – I recommend an excursion to the Playas del Este, Havana’s beaches. When you think of Havana, you don’t immediately think of the beach, but more of city excursions. Remember: since you are on an island, the beach is not far away.

The beach or beaches

The Playas del Este is the beach of Havana. Just outside of Havana, and just outside of Alamar, there is a touristy town with a beautiful Caribbean sandy beach, called Playas del Este (= the beaches of the east) – because they are located in the east of Havana. Usually, there are not many people around. You have a lot of space and you always get an umbrella (for 2 CUC). There are restaurants and several small supermarkets (one near the end of the bus, the other at Hotel MarAzul Tropicoco), where you can get cold water and beer for the beach. Furthermore, resourceful Cubans walk up and down the beach and sell coconuts filled with rum 😉

Actually, there is only one beach, which stretches over 12 kilometers in total, but is divided into different individual beaches (hence “Playas”, i.e. plural):

By the way, Playa Tarará used to be the student accommodation where the school trips went when there was still money and gas for such things. Later the “Chernobyl children” were treated here and even later Chinese contract workers were accommodated here. I do not know what is happening in Tarará, but it looks deserted.

How to get there: Bus, car, Amendrón, train?

Since the Playa del Este is in Havana, but not just around the corner, you have to drive there by motor – you can’t swim at the Malecón 😉 There are several options: 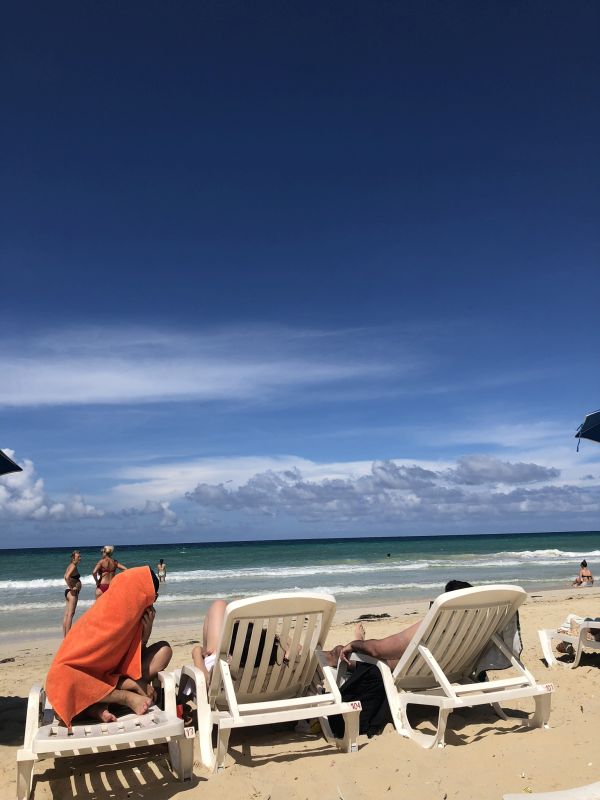 One can of course also stay overnight in Santa María, but there is not much going on there. Santa María is a sleepy tourist town. There are 2-3 small supermarkets, a few restaurants, and many apartment buildings, that’s it. Self-catering in a Casa Particular is a little bit difficult, you are more or less permanently dependent on restaurants or snack bars.

So it would be a possibility to see if you can find an all-inclusive hotel in Santa María – there are some. Then you will save yourself the stress of chasing food. Also the umbrellas are included in the price 😉 So you should see if there are any bargains, because otherwise you will have to pay a lot of money for a mediocre standard.

Therefore weigh up: well-kept Casa Particular and go out for dinner or expensive hotel with all-inclusive – both have advantages and disadvantages. And if you want to have a longer beach holiday, you should go to Varadero anyway, also only 2 hours drive from Havana.

The weekend – the Cubans celebrate on the beach

If you go to the Playas del Este on weekends, it’s full of Cubans. Most Cubans have the weekend off and go to the beach. And what does it take for a Cuban to celebrate? Rum and Regueton! So if you prefer to spend a quiet time at the beach, then you shouldn’t go on weekends. On the other hand, if you want to be right in the middle of Cuban life, you will enjoy the atmosphere 🙂

The beach and the weather

The sun burns hot in Cuba, much hotter than here, of course. Therefore always rent an umbrella, use a lot of sunscreen and don’t stay too long on the beach. A t-shirt for bathing has also proved to be a good idea, as well as a hat or a baseball cap if you – like me – don’t have so much hair on your head anymore 😉 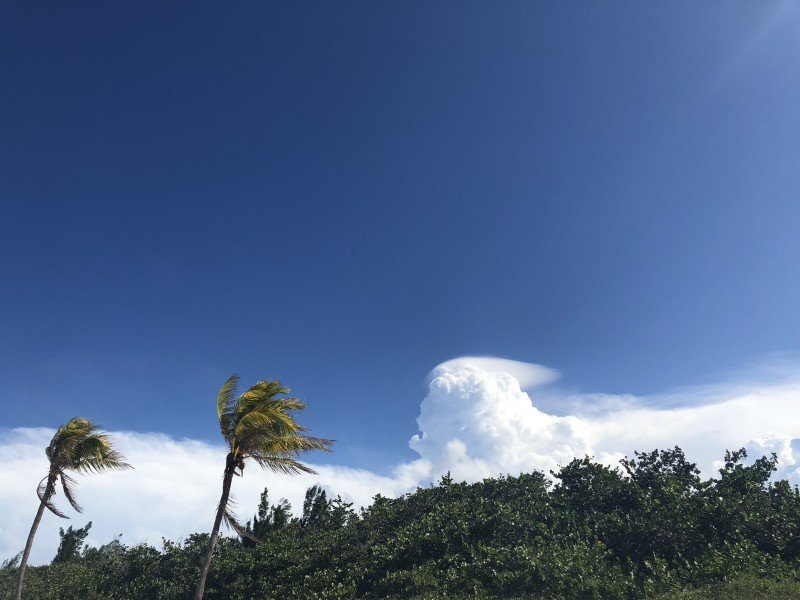 There is a tendency to get more rain in the afternoon, especially in the sultry months around September.

The advantage is of course that it has to be cloudy before the rain and we don’t burn so much! The only thing that is important is to make the jump in time before the rain starts and to get a taxi from the Playas del Este to Havana.

By the way, for Cubans there is nothing worse than waves and as soon as there is a bit more movement in the water, the red flag hangs outside. But most people don’t mind that. Probably the red flag just means that the waves are so high that they can spill into your rum cup – and that would be devastating 😉

You can rent both lounge chairs and umbrellas for about 2 CUC. You can also buy umbrellas made from palm leaves for 10 CUC.

You can order food and drinks from the umbrella operators, they will bring everything to you – of course with a certain surcharge, but you don’t have to move out of your chair for it 😉

Behind the dunes there are small snack bars where you can get typical Cuban food, sometimes in cardboard boxes – that’s what most locals eat. By the way, there are no forks. Either you make a spoon out of the lid of the “Cajita” or you eat A Lo Cubano i.e. with your identity card 😉

Across the street, there are also some restaurants with average food at average prices.

At some stalls, you can get a fresh Piña Colada for about 2 CUC, very tasty! Also recommendable are the beach are the vendors who walk along the beach with coconuts and rum. The coconut is whipped with a machete, you drink some coconut water and then you fill up with rum – great 😀

Otherwise you can get drinks and cookies in the supermarkets. A nice cold beer at the beach, that’s something in any case!

How safe is the beach?

By “safe” I don’t mean how dangerous the beach is, but whether you can leave things out on the beach. Basically, there are many police officers patrolling all Cuban beaches – even in summer, the poorest ones! – so that there are no major problems. However: my wife (Cuban) always insists that someone guards the things, it’s just like everywhere else: opportunity makes thieves. So make sure that someone is always close to your beach stuff, don’t take too valuable things with you, and if you all want to go into the water, ask other tourists to watch your stuff!

The Playas del Este is not in good condition at the moment: the sand is disappearing. Why this is so, I can only guess – there are many reports about disappearing beaches – but the fact is: at the Hotel Mar Azul Tropicoco, the beach is maybe still 2-3 meters wide, there, the chairs are already in the water due to lack of space.

At other places, the beach is indeed still wider, but the palm stumps rising out of the surf show quite clearly how the water has risen.

Possible reasons for the loss of the beach

There may be other reasons why Cuba’s beaches are running out of sand – not only the Playas del Este are affected, Varadero also has less sand. But I don’t know exactly why either. If you have any ideas, just comment.

Because of the erratic development I would guess that Irma was responsible for the devastation of the Playas del Este. Before, the beach was slowly getting smaller, but the jump from 2017 to 2018 was huge. If the slow loss of the beaches coincides with a natural disaster, then the effects are of course particularly drastic.

It doesn’t always have to be Varadero or the Cayos. Especially if one is on a city holiday, then it is also possible to relax at Playa del Este on the same trip, put up the tired legs and lay the belly in the sun. And also do a little bit for your tan, you don’t want to embarrass yourself when you get back home 😉 The Playas del Este is a good choice for this, not too crowded, quickly accessible – and of course Caribbean fine sand.

Basically you should prefer the eastern part of the Playas because they are a.) empty and b.) it is a bigger sandy beach so that it looks like the Caribbean and not the Mediterranean on the photos. That means you have to drive to the end station of the bus or even further by car because it is simply nicer – don’t get off at MarAzul Tropicoco!

If you don’t have a rental car, but take the bus or even the Almendrón to the playa, then you should plan some time, because it takes time to get to the beach. Also important: especially the way back in the evening can be a bit difficult, so you should always have 20 – 30 CUC for a taxi.

Well, this week the weather is bad here, so let’s dream about the Caribbean beach!
Saludos,
Dietmar

Revolico – Search and Find in Cuba