The Daiquiri – whether classic Cuban, Frappé or á la Hemingway: a summery delight!

The Daiquiri is next to the Mojito and the Cuba Libre as the classic Cuban cocktail. It is easy to see why just from looking at the ingredients: rum, sugar syrup, and lime. These are all natural products from Cuba.

Now, if we add a Nobel Prize winner – Hemingway – as an additional ingredient to the recipe, to make the Hemingway Daiquiri, we have the drink that has been in the top cocktail lists for decades: not only taste but also in history.

The Daiquiri is also available in different varieties, which makes it attractive for both sweet-mouths and sugar-haters, a very customizable cocktail. It can also be especially enjoyed in the summer or on a roof terrace in Cuba, by going with the Frozen Daiquiri. It is, of course, exactly what is needed to cool yourself off.

By the way, the Daiquiri is currently (2018) the Drink number 5 on the best selling cocktail list in the top bars of the world! 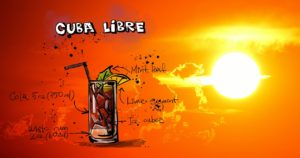 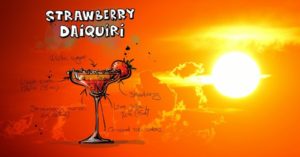 The Daiquiri is originally a classic Rum Sour: a cocktail of alcohol, sugar syrup, and lime juice. If we add a little more ice then we have our list of ingredients for the daiquiri recipe. The amounts vary depending on the cocktail mixer, the strength of the lime, and the amount of rum and sugar syrup. All of these can change the taste. But a good start is made with the following mixture, which you can easily remember from the 5:3:2 rule – and is not too strong:

The ingredients for the classic Daiquiri

The recipe of the International Bartender Association can be found here (but there are no preparation instructions).

By the way, I personally prefer a mixture with 2.5 cl lime, because I don’t like it that sour.

The preparation of the classic daiquiri

The preparation is quite simple in contrast to the Mojito. But you will need 2-3 tools:

A short note about the glasses: of course you can use other glasses, but remember: the daiquiri is a strong drink, so the glasses should be rather small.

The preparation starts by adding all 3 ingredients into the cocktail shaker. Then throw the ice cubes in and simply shake! Then the drink is strained so that the ice cubes remain in the shaker and do not dilute the drink afterward (“straight up” is the term used). This is why the glass should be chilled since there are no ice cubes in the drink itself. If you are a perfectionist, a tea strainer is also part of the package, so that no ice gets into the drink.

Another slice of lime on the edge of the glass and your cocktail is ready! If you compare the effort with the mojito, the daiquiri is a little easier to prepare. Simply prepared and ready to be drunk- and you don’t need crushed ice either. Of course, the Cuba Libre is even easier to prepare, but is that even a real cocktail?

The history of the Daiquiri

The daiquiri came around, at least under this name, circa 1900. Legend has it that it was invented by Jennings Cox, a US mining engineer who worked in the iron mine in Daiquirí, near Santiago. His colleague, Giacomo Pagliuchi, is said to have given the cocktail its name in honor of the mine where they both worked. The drink was probably introduced to the New York bars by William A. Chanler in 1902, he was the owner of the same mine. Likewise, Admiral Lucius W. Johnson, a medical officer in the US Navy, claims the privilege of having introduced the drink to Washington D.C. in 1909.

How the drink found its way into the bars to the rest of the world can no longer be clearly explained today. What gave the drink – and all rum cocktails – a boost was of course Franklin D.’s “Good Neighbor Policy”. Roosevelt during the Second World War forced the import of rum into the USA. Before that, rum cocktails were more for sailors and the lower classes. After that, rum cocktails became a fashionable drink and thus also John F. Kennedy’s favorite cocktail.

What’s true about the legend?

Reasons why people don’t believe that the daiquiri was not invented by Jennings Cox around 1900 can be explained by the preparation and the ingredients at that time. The preparation at that time was very simple: rum, sugar, lime juice all in a tall glass with ice, stir, then done. Extremely simple, a little too simple.

It is clear that the original daiquiri was not invented by one person. The ingredients were far too widely available and the preparation was too simple. By the way, this original daiquiri also corresponds to the grog of the British sailors, who (along with scurvy) had the following rations on their voyage since the 1740s Rum, water, three-quarters of an ounce of lemon/lime or lime juice, 2 ounces of sugar (and scurvy)- exactly the original daiquiri recipe. As ice cream production spread throughout the Caribbean, water was often replaced by ice.

Constantino Ribalaigua Vert and the Floridita

Constantino Ribalaigua probably helped bring the Daiquiri to its current style, who took the recipe over to the Floridita in 1918. He was aware that he had to stand out from the other bars and needed a special drink, such as the daiquiri.

His creation is what makes the simple mixed drink now a Cocktail Daiquiri:

That’s how Hemingway came to the daiquiri, in the Floridita, where he was a regular guest for over 20 years. He drank 6 – 8 daiquiri a day and a bronze statue still sit in his ancestral seat.

However, Papa Hemingway drank a variation. After first tasting the classic daiquiri, he is said to have said: “That’s good, but I’d rather have it with double rum and no sugar. “

So Constantino Ribalaigua developed a new drink for him. Today we call it the Hemingway Daiquiri, Papa Doble or Daiquiri Special. If you go into self-experiment, watch out, this is an awesome drink – drunk by men of the “Lost Generation”, who had lost all illusions on the battlefields of World War I (in addition, the reading recommendation “Fiesta” by Ernest Hemingway):

The belief that he gave up sugar because he was diabetic is not historically proven (I am a historian, so something like that is important to me…). Maybe he just didn’t like 8 sugar drinks in a row…

If you want to learn more about Hemingway, you can find my 1-day Hemingway tour here! (Site in German)

The Frozen Daiquiri, the cocktail for hot nights

The Frozen Daiquiri is, especially in Cuba, the most widespread Daiquiri. For the Frozen Daiquiri you will need a blender in addition to the ingredients.  This crushes the ice so that the drink almost freezes and gets a creamy, sorbet-like consistency.

The ingredients remain the same except the glass which is typically a goblet glass. Just throw all ingredients (see above) into the blender and let the blender run until everything is dazzled. Pour the concoction into the glass, straw in, then it is ready as the perfect summer drink for those hot cuban nights. 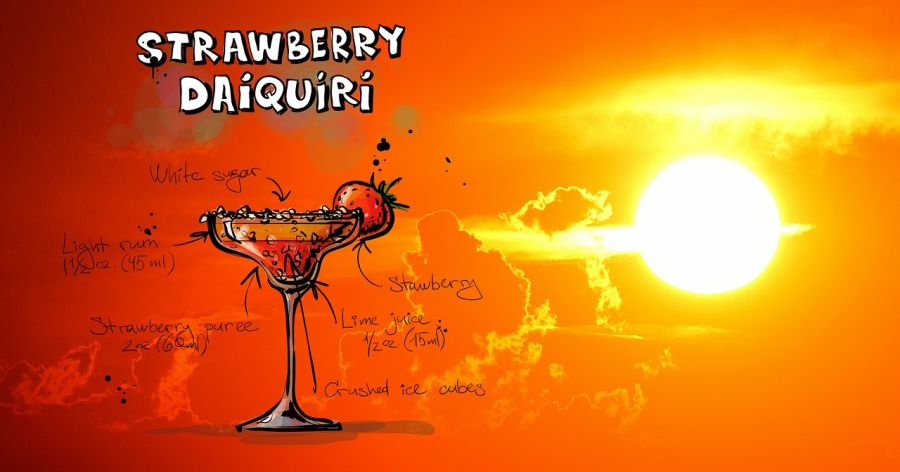 The Strawberry Daiquiri is typically also a frozen daiquiri. The difference is that this one is red and is similar to the frozen margarita.

For the strawberry daiquiri we take our usual ingredients but now add frozen strawberries and strawberry syrup:

Put everything in the blender, mix it all together, pour it into a cocktail bowl, and decorate with a strawberry – preferably a fresh one – and the delicious strawberry daiquiri is ready.

But you can also take other fruits, e.g. mango or whatever you can get your hands on. Since sugar syrup is always added to the cocktail, the fruits don’t even have to be extremely sweet, but a sweeter fruit would definitly help…

Now, if you want to go wild with other fruits, allrecipes.com offers a huge selection of fruit daiquiri recipes.

Why not a daiquiri with mint, basil or rosemary?

If you like things a bit more unusual, you can fill your shaker not only with the usual daiquiri ingredients but also with mint, basil or rosemary. In addition to the rosemary, there is also some bitter orange jam in the shaker to refine the Cuisine Cocktail.

It is important that you not only strain your mint, rosemary, or basil daiquiri but also filter it through a tea strainer so that the herbal parts do not contaminate the drink.

In Cuba you usually get the frozen daiquiri. If you order a normal daiquiri, you usually get a frown, but in the end, you get rum with ice, lime syrup and sugar syrup in one glass, the original recipe from around 1900 😀

Only a few bars in Cuba have international standard and the knowledge about cocktails, so I believe Mojito or Cuba Libre in Cuba, no experiments!

The Daiquiri in history and literature

The Daiquiri is also mentioned more often in literature, films and in public:

Conclusion: summer may come – and the daiquiris too ?

The important thing about the daiquiri is that it looks complicated but is actually quite easy to mix. You’ll look good at a party if you pull out the daiquiri. However, I advise caution, the drink is hard as hell and the sugar and acid mask the alcohol.

Frozen daiquiris are an especially good idea in the summer. And if you have visitors or want to barbecue on your terrace – they will definitely help spread the Cuban feeling. I recommend to pre-cut many different fruits, which people can then throw into the blender themselves. That saves you work and the guests have fun too.

Now it only remains for me to wish you a wonderful summer,
Saludos and Salud desde Berlin,
Dietmar